The “3 Days Jazz” was officially opened on Friday in the Kunsthaus Nexus. As every year, the opening project was awarded to an Austrian musician - this year the Austrian trumpet player Lorenz Raab got his turn. The Lorenz Raab Septet followed in the footsteps of Miles Davis and took the piece "In a Silent Way" as the starting point for a musical expedition of this legendary recording. International musicians from France, the USA, Germany, Hungary and Italy were represented. Among them was the French jazz saxophonist Émile Parisien, who presented his current album "Double Screening" with his quartet. Another well-known name in the program was Ken Vandermark, who has teamed up with the musicians from Grencsó Collective Special 5. Klaus Paier, Asja Valcic, Gerald Preinfalk and Patrice Héral set new standards in sounding out the unusual combination of their instruments and invited to the concert on Saturday evening at the Kunsthaus Nexus. Other highlights were the French trio Aïrés and the Italian band Ghost Horse, which performed with the exceptional American artist Dan Kinzelman. Sunday in the mining and Gothic museum in Leogang was all about Austrian musicians. The young exceptional musician Clemens Sainitzer gave a cello solo in the newly opened Thurnhaus, followed by Gerald Preinfalk with Klaus Paier, who have been making music together for more than 20 years.
17. - 19.01.2020
Kunsthaus Nexus, Mining- and gothicmuseum Leogang, Stöcklalm Leogang
07.00 pm
3 days
Address 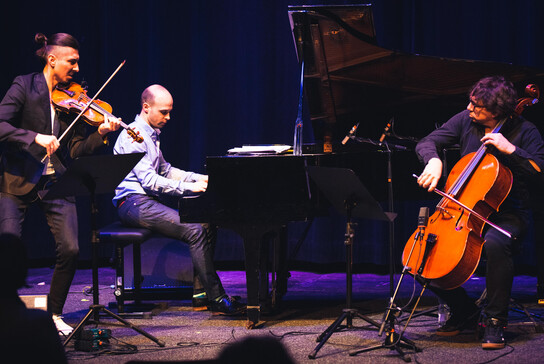 The festival was organized jointly by the Saalfelden Tourism Association and Zentrum Zeitgenössische Musik, art director Mario Steidl is responsible for the line-up.